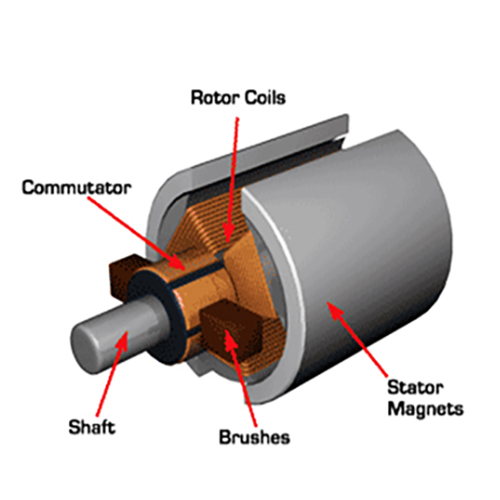 What is the difference between the slip ring and Split ring commutator?

To understand better, we will review the following:

The slip ring is an electromechanical device that transmits the electrical signal and power from a fixed part of the machine (stationary side) to a rotating structure part. In other words, the slip ring is a closed (continuous) ring that is designed to secure a continuous connection between the fixed part contacts (such as brushes), and the rotating structure contacts (the rings) on the rotating shaft, to provide continuous transmitting for power and signal.
For that, the slip ring can be used in a wide range of electromechanical systems that require unrestrained, rotation while transmitting power or signals at the same time. It can improve the mechanical work performance, and simplify system operation. Besides, it can eliminate the waste resulting from the environment’s affected cables and damaged wires dangling from movable joints.

Also known by Commutator, the split ring is a movable device used for reversing the polarity of the current. The ring has at least two breaks from the center, dividing the ring into two halves.
Each opposed pair of resulting contacts will be wired to opposed poles of the motor. In this case, the required is to get a pole reversal synchronous with the revolution of the motor. for that, it causes the poles of the windings to alternate polarity and turn the motor.
The combination between the split ring and brushes is known as the commutator. The split ring used in the DC motor for getting the pulsating input voltage

What is slip ring made of?

Depending on the type of the slip ring, the slip rings are made of alloys of materials such as steel, copper, bronze, and gold. The ring must have a very hard exterior compared to the material of brushes to ensure the minimum wear of the rings.
The working principle of the slip ring is based on ensuring the continuous providing of power and signal transmission by securing the continuous contact between the external part with the stationary conductors (brushes).

What is split ring made of?

The split ring is made of copper, and the ring has at least two breaks from the center, dividing the ring into two halves. The conductors (brushes) connect across the outer diameter of the split ring. The split ring used in the DC motor for getting the pulsating input voltage.

The difference between the slip ring and the commutator (split ring)

In machinery, automation or similar equipment, we have a fixed structure and our products which can transmit all variables such as electricity, liquid-gas, fiber optic, high frequency among the structures that require rotary motion. You can find information about these on your blog pages for application notes and appropriate product suggestions, or you can request support by writing to us directly.

We use cookies on our website to give you the most relevant experience by remembering your preferences and repeat visits. By clicking “Accept All”, you consent to the use of ALL the cookies. However, you may visit "Cookie Settings" to provide a controlled consent.
Cookie SettingsAccept All
Manage consent

This website uses cookies to improve your experience while you navigate through the website. Out of these, the cookies that are categorized as necessary are stored on your browser as they are essential for the working of basic functionalities of the website. We also use third-party cookies that help us analyze and understand how you use this website. These cookies will be stored in your browser only with your consent. You also have the option to opt-out of these cookies. But opting out of some of these cookies may affect your browsing experience.
Necessary Always Enabled
Necessary cookies are absolutely essential for the website to function properly. These cookies ensure basic functionalities and security features of the website, anonymously.
Functional
Functional cookies help to perform certain functionalities like sharing the content of the website on social media platforms, collect feedbacks, and other third-party features.
Performance
Performance cookies are used to understand and analyze the key performance indexes of the website which helps in delivering a better user experience for the visitors.
Analytics
Analytical cookies are used to understand how visitors interact with the website. These cookies help provide information on metrics the number of visitors, bounce rate, traffic source, etc.
Advertisement
Advertisement cookies are used to provide visitors with relevant ads and marketing campaigns. These cookies track visitors across websites and collect information to provide customized ads.
Others
Other uncategorized cookies are those that are being analyzed and have not been classified into a category as yet.
SAVE & ACCEPT
Select your currency
USDUnited States (US) dollar
EUR Euro
GBP Pound sterling
TRY Turkish lira